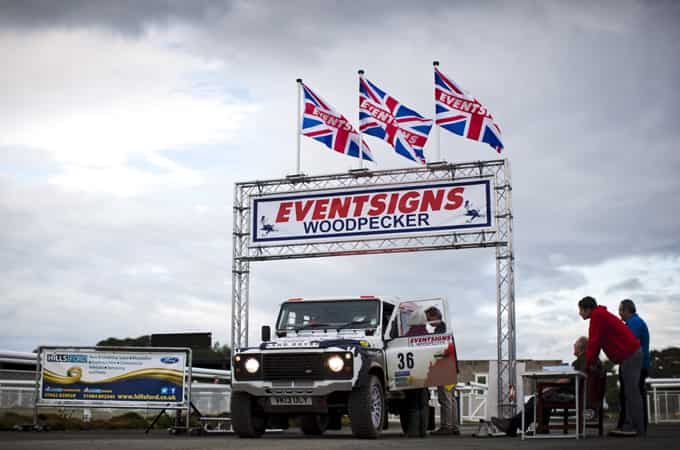 The Woodpecker Stages Rally was the fifth round of the 2014 Defender Challenge rally series. Based in the forests around Ludlow, Shropshire, the event was set over six special stages.

Six Defender Challenge teams took to the stages and were faced with challenging terrain due to the wet conditions. In spite of the tricky conditions, Edd Cobley managed to secure his fourth victory of the season, with Allan Jackson in the navigator’s seat. Cobley said, “It’s been amazing. This morning it was so slippy out on stage but the car once again did exactly what we asked it to do. We were a minute quicker over three and a half miles on the first stage but then Ben got close to us in the Race2Recovery vehicle on the second stage. The afternoon was fantastic and it’s great to get some more points on the board.”

The Race2Recovery team took their fourth consecutive podium finish, with Ben Gott and Stephanie Boddez finishing second of the Defender Challenge competitors. Gott said “This was my first stage rally so my first time using pacenotes. By the time I got to the third stage I was getting used to it.  We’re getting more confident in the car and I’m happy with the pace we have. We’ll keep on pushing hard for the rest of the season.”

Damien and Simon Taft returned to the podium after an accident at the Welsh Hill Rally last time out. Damien Taft said, “We lost a bit of time on the first few stages as the tyre pressure wasn’t right so the vehicle wasn’t handling well. It took another couple of stages to get back into it. We finished third so it’s not a bad result. We had a bit of an incident last time so it’s good to finish the event without too much drama and it’s all good practice. Trying to catch Ben and Edd was difficult but hopefully we can manage it next time.”

There are now just two rounds remaining of the 2014 Defender Challenge. The penultimate round of the season will be the Cambrian Rally on 18th - 19th October and the final round will be the Border Hill Rally which takes place on 22nd – 23rd November.