Whitley, UK - An epic journey to return a mistreated lion from Europe to Africa has begun, with Land Rover Experience and The Born Free Foundation at the heart of the rescue mission.

The Lion named Simba, has been loaded into a wildlife crate approved by the International Air Transport Association (IATA), and driven from his temporary home in Belgium bound for Amsterdam's Schiphol airport. Providing all the support and towing capability is a six-strong convoy of Land Rover Discovery vehicles and an expert team from Land Rover Experience. 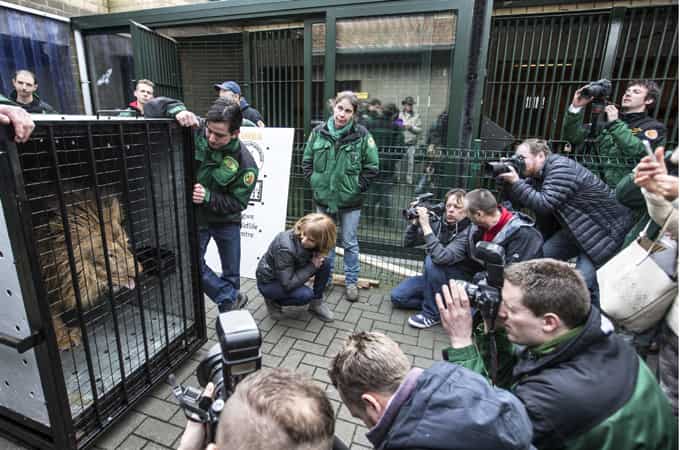 The ambitious journey is being carried out by the Born Free Foundation, Land Rover's primary global conservation partner. The partnership began in 2002, but the origins of the association date back to 1966 when Land Rovers featured in the classic wildlife film Born Free, starring the Foundation's founders, Virginia McKenna and Bill Travers. Their requirement was then as it is now - vehicles with outstanding capacity and all terrain capability to reach wildlife in the most remote locations.

Mark Cameron, Jaguar Land Rover Global Brand Experience Director, said: "During the past decade Land Rover has enjoyed a successful and rewarding partnership with the Born Free Foundation. I am therefore delighted that our Land Rover Experience team has been able to help with the safe relocation of Simba from Belgium to Malawi."

He added: "Born Free has worked tirelessly to ensure Simba enjoys the rest of his life in his new home. I am very proud that through the towing capability of our vehicles and the experience of our Land Rover Experience drive team, we can help this become a reality."

Simba's 4,900-mile journey south will take him to the Born Free Foundation-supported Lilongwe Wildlife Centre in Malawi. It will mark the final chapter in a heart-breaking story of animal cruelty.

Simba was just six months old when he entered the Parc Zoologique du Bouy in France, and only two months later was then acquired by an animal trainer in Vernay. His home became a 'beast wagon' - nothing more than a lorry trailer - and the occasional use of a small outside run.

Fate stepped in when French authorities ordered Simba to be handed over. At the end of 2012, thanks to a concerted effort by Fondation 30 Millions d'Amis, a French non-governmental organisation, temporary shelter was found at the Natuurhulpcentrum, a Belgium wildlife rescue centre.

On arrival at Schiphol, Simba will be taken to the animal quarantine centre before boarding a Kenya Airways 767 aircraft to Nairobi. There Simba will be met by Virginia McKenna OBE, who will join the team on its drive into Malawi. The Born Free Foundation's Land Rover vehicles will be on hand to tow Simba to his new home.

Virginia said, "It is about one animal, one individual, but all of them matter and Simba, having initially been taken in by a Belgian Rescue centre from an animal trainer in France, is now to begin his final journey to Africa, his rightful homeland. The public's generous response to his situation has been quite amazing. Indeed, people are increasingly aware of how wild animals can be exploited and can suffer, and perhaps long to be a part of a caring and positive story."

Virginia concluded, "I am very grateful to Land Rover for its support and fortunate, to be accompanying Simba to his new home in Malawi, where I know he will be beautifully cared for, living the rest of his life in a natural bush enclosure - a stark contrast to the circus wagon and barren "exercise" pen in France. And perhaps, eventually, he will be introduced to beautiful Bella, the one-eyed lioness we brought there 5 years ago. That would be a happy ending!"