The team of 16 year olds were named Land Rover 4x4 in Schools World Champions at the event held in Ricoh Arena, Coventry, UK. In the Challenge, teams spend months designing, building and testing miniature remote-controlled 4x4 vehicles which must complete challenging off-road tracks in regional and national final competitions. National champions from as far afield as Australia, United Arab Emirates and Brazil came together for the first ever World Final.

The ‘Vertical Horizons’ team impressed the judges and achieved an excellent driving challenge on the tough test track, which included a rope bridge, water dip and rock crawl as it travelled through and round a Range Rover vehicle.

The Land Rover 4x4 in Schools Technology Challenge is an innovative educational initiative which has engaged more than 100,000 young people since it was launched in the UK in 2007. Last year, the Challenge was rolled out to 15 countries around the world.

‘Vertical Horizons’ team manager Ben Weaver, said, “I’m delighted we won, it’s beyond anything we dreamed of. I think we were successful thanks to 1,000 hours of hard graft, team work and perseverance as well as attention to detail. We also developed a unique suspension and focused on quality craftsmanship, engineering and design throughout the project. As a result of the Challenge, we are all now inspired to become engineers. It’s been a great experience and we prove that if you put the effort in, you can succeed.”

Teacher Eric Lummas, added, “I’m extremely proud of the team. They have worked very hard to achieve success including lots of work outside school. The Challenge has helped them strengthen key skills such as team working, problem solving and communication which will help them when they enter the world of work. The competition is a great opportunity for young people and I’d highly recommend it to other schools and students.”

Les Ratcliffe, Head of Community Relations for Jaguar Land Rover said, “We’re delighted to host the first ever world finals in Coventry, UK, close to Jaguar Land Rover’s Headquarters, and show the students around our Solihull plant during the programme. Huge congratulations to ‘Vertical Horizon’ for winning the inaugural Land Rover 4x4 in Schools Technology Challenge World Final. Launching the hugely successful Land Rover 4x4 in Schools competition globally will help us engage 2 million young people in our education programme by 2020 and will introduce even more young people to the exciting world of engineering. Students have built skills, experiences, friendships and memories during the three day programme which will stay with them throughout their lives.” 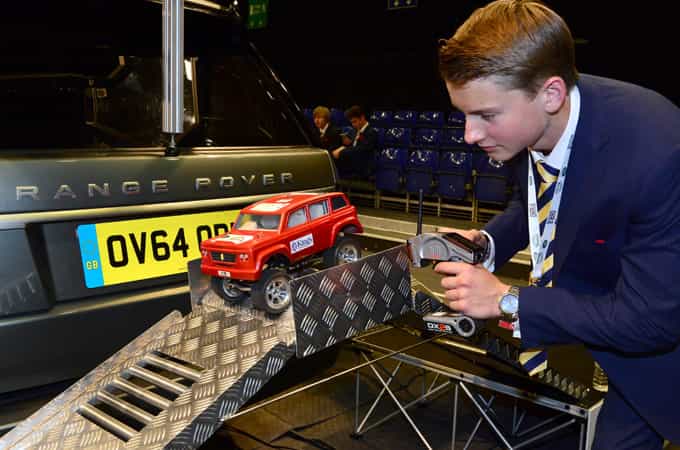 Virgin Galactic Commercial Director Stephen Attenborough commented, “As Virgin Galactic’s team continues to develop our spaceflight vehicles, our partnership with Land Rover is providing a wonderful opportunity to bring some of the challenges of commercial space travel into the classroom. By encouraging our brightest young minds today to tackle some of the engineering challenges of tomorrow, Land Rover and Virgin Galactic hope to inspire young people along an educational path that will produce brilliant engineers and scientists - and a brighter future for the planet.”

Teams from Greece, Australia, Portugal, UAE, Czech Republic and UK also collected awards for their achievements in key elements of the judging process.