The fastest and most powerful ever production Land Rover will make its public debut at this year’s Goodwood Festival of Speed.

High Performance Range Rover Sport SVR Prototype Set To Storm The Goodwood Hill 25 JUNE 2014 The fastest and most powerful ever production Land Rover will make its prototype public debut at this year's Goodwood Festival of Speed (27 to 29 June). The Range Rover Sport SVR will be the first model to wear the new SVR designation, which will be worn by all future high performance models.

A camouflaged prototype of the 550PS Range Rover Sport SVR will take a break from its demanding development schedule to give spectators a chance to experience the sights and sounds of the most exhilarating Land Rover ever produced. It will perform a series of runs up the famous Goodwood Hill course in the 'First Glance' category.

The Range Rover Sport SVR is currently undergoing development prior to going on sale in 2015. Details of the vehicle's 550PS powertrain are still under wraps, but crowds can expect a thrilling soundtrack to match its impressive pace. Performance data for the SVR will extend the Range Rover Sport's established capabilities as the fastest, most agile and most responsive Land Rover ever built. 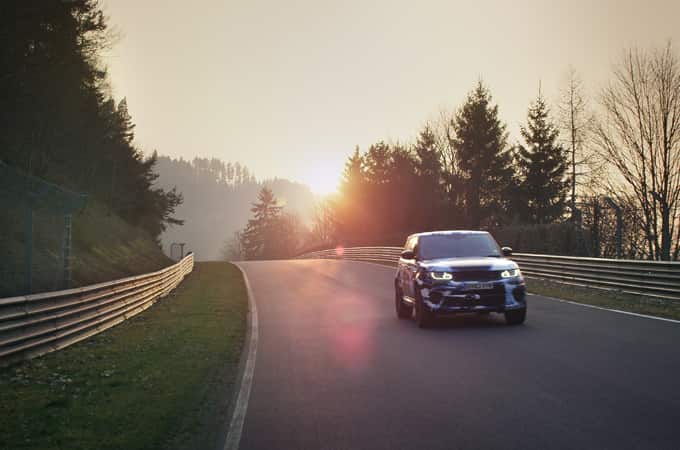 The Range Rover Sport SVR has been created by Jaguar Land Rover's Special Vehicle Operations team and all future SVR models will need to meet stringent key performance criteria in order to wear the SVR badge. They will be built alongside existing models and sold through the Land Rover retailer network in the usual way.

Land Rover redefined the performance SUV sector with the launch of the original Range Rover Sport in 2005, successfully combining sports performance with uncompromised all-terrain capabilities. This is reflected in the current tally of 500,000 vehicles produced.

Visitors to the Goodwood Festival of Speed will have a wide range of Land Rover experiences available to them including an off-road passenger ride in current product on the stand. The Discovery Vision Concept will also be on display providing a glimpse into the future design and technology for a family of Discovery vehicles. Customers will be able to browse the full range of all-terrain vehicles including the Freelander Metropolis, Discovery XXV and the recently announced Stealth Pack featured on the Range Rover Sport. Bowler will also be demonstrating the Defender Challenge vehicle, EXR and EXR-S on the Bowler activity field located between the central arena and the rally stage.