6 March 2014 - The Royal Foundation of The Duke and Duchess of Cambridge and Prince Harry, in partnership with the Ministry of Defence, today announces that the 'Invictus Games' presented by Jaguar Land Rover, an international sporting event for wounded, injured and sick Service personnel, will take place in London from 10-14 September 2014. 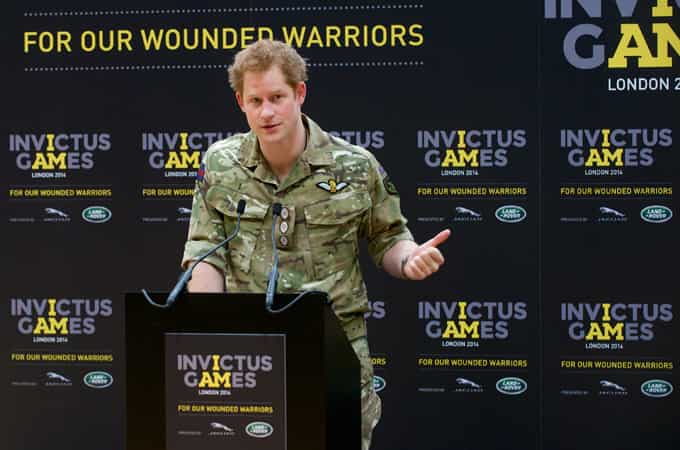 The event is championed by Prince Harry. It will see more than 300 wounded, injured and sick Servicemen and women, serving and veteran, competing in the Queen Elizabeth Olympic Park and the Lee Valley Athletics Centre, thanks to the Mayor of London, the London Legacy Development Corporation and the Lee Valley Regional Park Authority. On the programme will be Athletics, Archery, Wheelchair Basketball, Road Cycling, Indoor Rowing, Wheelchair Rugby, Swimming, Sitting Volleyball and a driving challenge. Teams will be invited from the armed forces of 13 nations that have served alongside each other, with relative newcomers to adaptive sport joining advanced athletes in an inclusive programme.

At the heart of the Games will be the servicemen and women who will represent their nations in this first ever international Invictus Games. Captain David Henson, who hopes to compete in September, commented: "Competitive sport has made all the difference to my personal recovery and rehabilitation. For a whole international community of injured 'brothers in arms' who flat out refuse to let themselves be beaten by their injuries, the Invictus Games in London will offer a memorable, inspiring and energising experience in their journey of recovery. This is not just the story of our wounded, but of all of our servicemen and women. We will each prove, as William Ernest Henley's famous poem Invictus so aptly says: I AM the master of my fate. I AM the captain of my soul."

The word 'Invictus' means 'unconquered'. It embodies the fighting spirit of the wounded, injured and sick service personnel and what these tenacious men and women can achieve, post injury. The Invictus Games will celebrate this through sporting achievement that recognises the sacrifice they, and others, have made.

The Royal Foundation of The Duke and Duchess of Cambridge and Prince Harry, will contribute a significant grant to staging the Invictus Games. The events in September will mark the beginning of a legacy programme to support accessibility of adaptive sport and further employment opportunities for transitioning Servicemen and women leaving the Armed Forces. The Chancellor of the Exchequer, George Osborne, is also supporting this important cause by matching the Royal Foundation donation with £1million from the LIBOR fund.

With this strong funding base, the Organising Committee, the Royal Foundation and Ministry of Defence will be working with businesses, organisations and individuals to help secure the remainder of the necessary funds. Today, Jaguar Land Rover has pledged its support by becoming presenting partner and will explore opportunities with the Royal Foundation and the Ministry of Defence to create innovative ways to enhance the valuable role of veterans as skilled employees, as a way of creating a lasting legacy for the Games. There will also be a driving challenge as part of the schedule of events for the participants, organised by Jaguar Land Rover.

Competitors and live audiences can look forward to enjoying the occasion in venues made famous by the London 2012 Games. These venues include the Copper Box, the Aquatic Centre and the VeloPark. Track and field disciplines will run at Lee Valley Athletics Centre.

The event will also be broadcast by the BBC - today confirmed as the official broadcast partner. Live coverage, highlights packages and other programming are planned around the event.

A ceremony will be held to mark the opening, involving the competitors. A closing concert is also being planned, which will represent another celebration of adaptive sport in the UK, building on the legacy of the London 2012 Paralympic Games.  Organisers are also hoping to give competitors the opportunity to bring family and friends, from around the world, to share the experience.

The Invictus Games, presented by Jaguar Land Rover, has strong levels of support from the very top levels of the UK and London.