5X15: CAN AND WILL Q&AS WITH FIVE EXTRAORDINARY SPEAKERS

Land Rover’s Can And Will themed 5x15 saw five remarkable people draw on their passions and adventures to talk for 15 unscripted minutes each at the Royal Geographical Society.

After their brilliant talks, we caught up with the speakers to ask them a few more questions…

Who or what inspires you?

KB: As you get older, I think what inspires you is the people you want to emulate in business. For me it’s people like Madonna, who’s still relevant in her 50s, or Hilary Clinton, who’s risen up out of the ashes of her husband to have her own political career. Or people like Annie Lennox, who campaigns for women’s rights.

What’s the toughest challenge you’ve had to overcome in your career?

KB: I’m the sort of person that never hears the word no. I just hear, ‘think of another way to get what you want’. So, I think challenges are only tough if they stop you doing what you want. But I think the toughest thing generally about my industry has been getting other women in it. When I went to West Ham there were no women in senior management – now there are 50% and growing.

What moment in your illustrious career are you most proud of?

KB: Probably floating my company on the stock market in 1997, having taken it over in administration in 1993. I think it showed that we’d done such great work in such a short period of time, and that gave us the money to rebuild the club, we rebuilt the facilities.

Where will West Ham finish in the Premier League this year?

KB: Well I don’t have my crystal ball… but I hope in the top half! 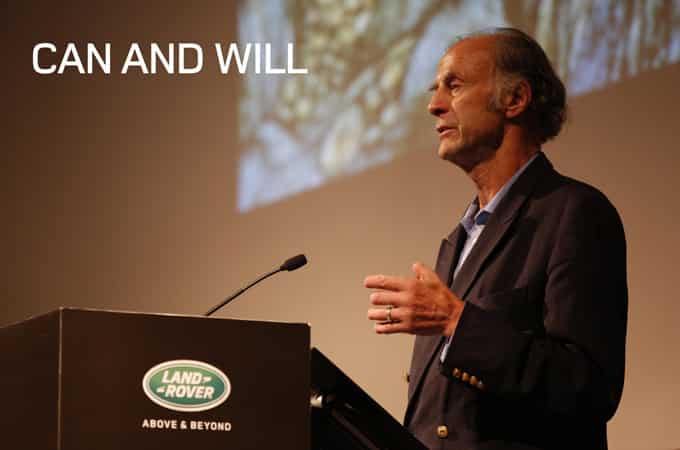 Sir Ranulph Fiennes is the world’s greatest living explorer. He was the first man to reach both poles by surface travel, and in 2009 became the oldest Briton to reach the summit of Everest.

What qualities do you look for when choosing people for an expedition?

SRF: You need the best people. You can teach skills, but you can’t change characters. When you’re choosing people, you need them to be mentally very tough indeed – because it only takes one of them to wimp out and you fail. The slowest, weakest sheep has got to be pretty strong.

What makes you passionate about an expedition?

SRF: We only go for world records, not gimmicks. Not adventures, but expeditions: we found a lost city that had been lost for 2,500 years in the greatest desert in the world.

Tell us about completing the Land Rover 7x7x7 Challenge…

SRF: This was the first ever seven marathons in seven continents in seven consecutive days. If you missed the scheduled flight, the whole thing was gone. By the end of the 7 days, we were being violently sick and not wanting to do the next one. Plus three-month previously I had had a massive heart attack and a double heart bypass. So it wasn’t very good timing.

Why didn’t you give up?

SRF: We had to do it then, because there were other people trying to break the record at the same time. This is always the case; it’s a rat race. Once somebody’s broken a world record, you’ve broken it and they can’t have it – that’s what we’ve been going for over the years.

How tough was it crossing Antarctica on foot?

SRF: After 97 days: we had gangrene and our teeth were falling out. We were in a very bad way. I set out at 15 and a half stone; by halfway I was under 9 stone, despite eating 5,000 calories a day. Even Weight Watchers wouldn’t recommend it.

What motivates you to keep going when things get that bad?

SRF: I invent my own help to beat the wimpish voice in my mind, the voice trying to say “stop”. I reckon the two people I respect most of all, my father and grandfather, are there watching, and I don’t want to let them down.

But I do want to wimp out – in the tent at night I’m looking at the others hoping they’ll break their leg or something.

What else do you want to achieve?

SRF: I wanted to do the Marathon des Sables this year, but they said if I waited until next year I’d be the oldest Brit to do it. So that’s what I’m training hard to do at the moment. You raise more money if the person who is doing it is the youngest, or the oldest, or whatever. We’ve raised £16.8 million from our expeditions at the moment, but I wanted, before popping it, to reach £20m.


Pam Warhurst is a community activist who co-founded local food partnership Incredible Edible in her home of Todmorden, West Yorkshire.

What inspired you to found Incredible Edible?

If you want something done, get it done yourself?

How do you get people to unite around something that you’re passionate about?

PW: Well, food is the universal language. So you’re in straight away. We’ve got a saying, which is “if you eat you’re in”. It doesn’t matter what your age, income or ability, culture… people get food.

What legacy would you want your activism and work to have?

PW: To make them helpful frameworks so people can grow food wherever they want to grow. Just normalise what we’re doing with Incredible Edible, that’d be a great legacy.

What 3 qualities are most important to be successful and happy in life?

PW: Positivity, a good sense of humour, and loads of passion.

What would the perfect meal be, using locally grown ingredients?

PW: My perfect meal is just a salad made from local tomatoes and stuff like that, with the local cheese on top of it – I’d be euphoric, and if the sourdough bread is local as well, that’s grand.


Mick Ebeling is an entrepreneur, philanthropist and producer. His is the founder of Not Impossible , an organization that develops creative solutions to real-world problems. One of these was Project Daniel, the world’s first 3D-printing prosthetic lab.

What drew you to your motto, ‘If not now, then when? If not me, then who?’

ME: It’s about the urgency and immediacy of actually getting something done, as opposed to the passive waiting for things to happen to you. Failure is not that big of a deal… so why not give it a whack? If you fail then what happens? You try, and you try again.

What is the one achievement that you’re the most proud of?

ME: The creation of the Eyewriter . Watching and experiencing and feeling someone who had not drawn for seven years do it again and basically get his passion back – that was a pretty life changing experience to witness.

Who or what motivates you, and why?

ME: People that take risks… people that go for it, but aren’t impressed with themselves.

What projects are you working on at the moment?

ME: We’re putting Project Daniel into 10-15 developing countries around the world – not just with 3D printed prosthetics, but also with other tools and other toolsets. So, everything from infant incubators to brickmaking machines. Where it’s gonna get incredibly cool is that what gets made in each of these villages is gonna then be shared to the other villages, so that it starts to spark and inspire other things to be made. I’m excited for the first moment when they figure out how to make something or do something, but I’m equally as inspired by what’s gonna happen, 8,10, 12 months after that.

ME: I think the greatest challenge happens everyday when you doubt yourself, and being able to perservere through that. I think… Climbing mountains or going to war torn countries or things like that, those are challenges that are in front of you. I think that it’s the silent demons are the ones that are the hardest.


Mike Goody is a former RAF serviceman who lost part of his left leg in an IED blast in Afghanistan in 2008. He recently won four golds and a silver at the inaugural Invictus Games.

What was your highlight from the Invictus games?

MG: Just being around the lads again… us all coming together and competing – getting that camaraderie and banter, but on an international level. Also, for me personally: I went to support at the athletics, and there was a 6-year-old amputee, Rio, who came running up and wanted a high five and a picture taken. He said ‘I’m like you’. I was in awe of this kid’s determination and general attitude.

You have become an inspiration to other ex-servicemen and women. How does that feel?

MG: If I can inspire one person to change their life – what they’re eating, fitness, how they do something – then I think that’s fantastic. The Invictus Games have given [all of the athletes] the opportunity to do that. Hopefully we will continue to be able to bring hope to others, and change people’s thoughts and perceptions, by educating them about what some of us have gone through and how that might relate in their own lives.

How important was sport in your rehabilitation?

MG: Sport was incredibly important, physically and psychologically. Swimming became paramount for me – when I was in the water, I didn’t feel like a disabled person. Swimming really made me focus and concentrate and built my confidence.

What made you decide to get a tattoo saying ‘I miss my friend’ on your right leg?

MG: Because people stare at my leg anyway, and it used to really bother me… but I figured if someone’s gonna look, they might as well have a laugh. It’s an icebreaker as well – especially when kids are curious come and ask me what happened. I’d rather they had a laugh.

What challenges do you want to overcome next?

MG: I’ve got some big decisions to make. I want to be the UK’s first frontline below the knee amputee paramedic. But the next step with swimming is to get myself confirmed in a classification and see… with the right training and really throwing myself into it as a full time job, the potential could be the Rio 2016 Paralympics.