Land Rover has strengthened its fastest-selling model, the Range Rover Evoque. The luxury compact SUV features a comprehensive range of new design features and technologies to reinforce its status as the market leader.

Interior changes include new seats and door casings, new infotainment system, accessed via an eight-inch touchscreen, and the introduction of new colour and materials such as Lunar Ice, Vintage Tan and Dark Cherry (Autobiography only) complementing Evoque’s bold architectural forms.

Land Rover’s advanced new diesel engine also debuts. The new EU6-compliant four-cylinder Ingenium unit brings a class-leading combination of performance, refinement and efficiency. The cutting-edge engine, which is designed, engineered and manufactured in the UK, provides up to 180PS, fuel economy of up to 68mpg (4.2l/100km) and CO2 emissions as low as 109g/km*. That makes the class-leading Evoque the most efficient Land Rover ever produced.

Jeremy Hicks, Jaguar Land Rover UK Managing Director said: “The Evoque has proven to be an enormous success in the UK with sales of 62,000 since its launch back in 2011. Clever design, class leading residuals and competitive cost of ownership have all been contributors to its success.

“The 2016 model year Evoque builds on this achievement with a new engine line up delivering outstanding CO2 emissions down to 109g/km and for the first time; an all-wheel drive version under 130g/km. This combined with intelligent and relevant technology will ensure that the Range Rover Evoque is an attractive proposition to both private and fleet & business customers.” 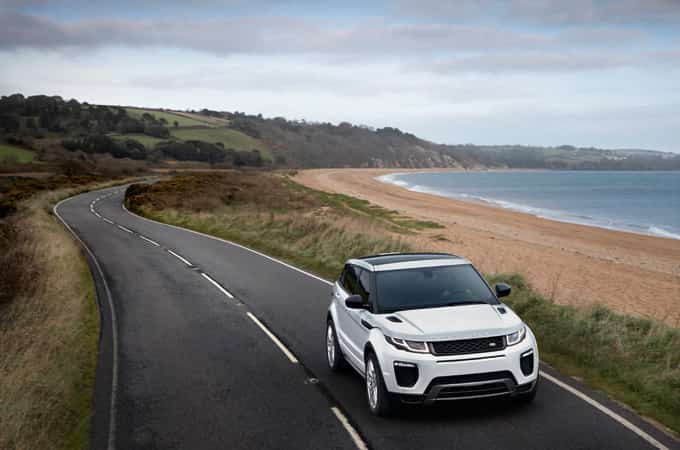 Evoque’s highly desirable design is a hallmark of this luxurious compact SUV. The introduction of the slimline LED foglamps and a noticeably wider tow-eye cover enhance the new front bumper design. The enlarged air intakes allude to its sporting character and create a more planted stance and further emphasise Evoque’s assertive road presence.

2016 model year Evoque is the first Jaguar Land Rover to be offered with full-LED adaptive headlamps, providing superior visibility at night. This advanced technology has been pivotal in creating a signature headlamp and tail lamp design, working in harmony with Evoque’s dramatic exterior. Enhancing safety and creating an even more striking visual statement, the indicator function is now integrated into Evoque’s distinctive LED daytime-running lights (DRLs), sweeping across the full width of the light clusters. As an additional benefit, energy-efficient LED technology reduces the demands placed on Evoque’s electrical systems.

With three new alloy wheel designs with two finishes and an extensive palette of exterior colours with available contrast roof designs, the possibilities for creating an Evoque to a customer’s individual specification are now almost endless.

New seats and door casings combined with a redesigned instrument binnacle promote a sophisticated ambiance to the overall interior. New premium soft-touch materials create improved levels of quality with a broader specification range than ever before.

A range of advanced features have been applied to the Ingenium engines to ensure outstanding environmental performance, including variable valve timing and a series of low friction technologies. Selective catalytic reduction and a new low-pressure exhaust gas recirculation system significantly reduce NOx emissions.

Service intervals for the TD4 engine have been extended from 16,000 miles to 21,000 miles to reduce running costs on the new lightweight engines.

The 2016 model year Range Rover Evoque will be the first Land Rover vehicle to be designated as an ‘E-Capability’ variant. The most efficient models will wear a blue ‘Evoque’ badge, applied to the eD4 109g/km (coupe) and 113g/km (five-door) front-wheel drive derivatives, highlighting the status of Land Rover’s most efficient vehicles.

InControlTM Touch is fitted as standard equipment on SE Evoque models, featuring easy-to-navigate menus and allowing users to swipe between screens just like a smartphone. InControlTM Apps allows owners to access many popular smartphone apps using the centrally-mounted touchscreen on the central console.

Additionally, the six-speaker stereo system can be upgraded to include SD-card based satellite navigation, with DAB radio featuring as standard across the range.

InControlTM Touch Plus, standard on HSE Dynamic and Autobiography, can also be specified, comprising HDD-based navigation, optional rear-seat entertainment system complete with a pair of eight-inch video screens and wireless digital headphones, and an 11- or optional 17-speaker Meridian audio system.

An innovative hands-free tailgate function also adds a new dimension to the convenience of Evoque ownership. It allows owners to automatically open and close the tailgate by waving a foot beneath the rear bumper, whilst not compromising security. The handy feature is even compatible with a tow bar and greatly improves access to the luggage space when returning to the vehicle with bags of shopping.

The stress-reducing technology maintains a pre-determined speed (selected using the cruise control function) in forward or reverse gears between 1.1mph and 19mph (1.8km/h to 30km/h), allowing the driver to concentrate on negotiating tricky terrain. ATPC makes Evoque’s class-leading off-road capability more accessible and enjoyable than ever.

Autonomous Emergency Braking (AEB) prevents or greatly reduces the severity of accidents in the event of the driver failing to take preventative action.

Using an advanced forward-facing stereo digital camera, the system can identify potential hazards ahead. If a collision risk is detected, the driver is alerted by visual and audible prompts and, if the driver fails to take evasive action, the system helps to avoid collisions below 32mph (50km/h), and reduces the severity of an impact at speeds below 50mph, (80km/h).

Attention Assist Estimation completes the trio of advanced new safety systems fitted to 2016 model year Evoque. It monitors steering inputs to detect when a driver is at risk of falling asleep at the wheel. Audible alarms and visual warnings signal when drowsiness is detected.

The 2016 model year Evoque’s trim levels have been realigned to match those of the Range Rover Sport so customers have the choice of three highly-desirable models: SE, HSE Dynamic and Autobiography.

More than 400,000 Evoques have been produced globally since its introduction in 2011 making the premium compact SUV the fastest-selling Land Rover of all time. Last year, 2014, marked the Evoque’s most successful year to date, with 125,364 global sales.

This sales success has been accompanied by critical acclaim, as Evoque has won more than 165 international awards since launch. The hugely successful model will also be the most efficient car in its class when deliveries begin in August 2015, in over 170 markets worldwide.

Specific pricing by market will be announced closer to launch. Indicative pricing for the 2016 model year Range Rover Evoque will be comparable with the current model.